All religions use basic advertising theory to market their ideas. Whether your product is the word of God or a Nexus 5, the strategy is the same. Convince your potential buyer that they have a problem and then offer a solution. For example, below you see three advertisements: a flyer for the St. Philip AME Church; a clipping from the May 1973 issue of Movieland and TV Time advertising religious paraphenelia; and a billboard ad for the Nexus 5 smartphone.

The hook of the ad is the quote “God has a vision for our lives that is greater than any vision we can have for ourselves or that others can have for us.” What’s attractive about this quote is that it taps into the potential doubts one might have about the direction of their life. There is a very good chance that the life of whoever reads it is not picture perfect, and that person may be more inclined to believe the statement about someone else having a better idea about what we should do and who we should be (especially if that person is God). A solution is offered in the form of Reverend William D. Watley, Ph.D and Senior Pastor, whose title alone speaks to competency.

"God I am troubled!" Newspaper Advertisement from 1973

Here the hook is a little more obvious. The advertisement lists common problems that readers are likely to have at any given time, such as nervousness, money problems, family and love troubles. A new way of prayer that is allegedly already helping thousands of others with these issues is a single letter away. By pointing out that you are not alone in your struggles against these mundane obstacles, the advertisement comforts you with the feeling of being in a group. It also promises something free, a keyword that triggers a special interest in our minds (according to Dan Ariely, a specialist in behavior economics and author of Predictably Irrational).

This is the subtlest advertisement out of the three. Admittedly, Google doesn’t need to work very hard because of the technology boom and worshipful nature with which the populus regards smart phones. But the hook here is both in the image of the product itself and in the suggestion that you can be more connected to your world than you are at present. The body language of the figure standing atop the rocks is saying, very boldly, “I am successful”. This posture with the arms raised is a universal human pose for feeling powerful and victorious (for example, every athlete around the world does this after winning something, regardless of culture, heritage, race, class, education, etc). The ad is creating a mental link between the potential consumer’s desire to be the creator of (the phone is also a tool) and also connected to (the elite group of smartphone users) the world they live in, and the feeling of being in control, triumph, mastery, and victory.

In terms of internet advertisements for churches, Google provides several options for anyone to promote the growth of their religious establishment. Particularly for smaller churches, it seems like the use of technology and online member recruitment strategies is becoming more important to maintaining religious community. 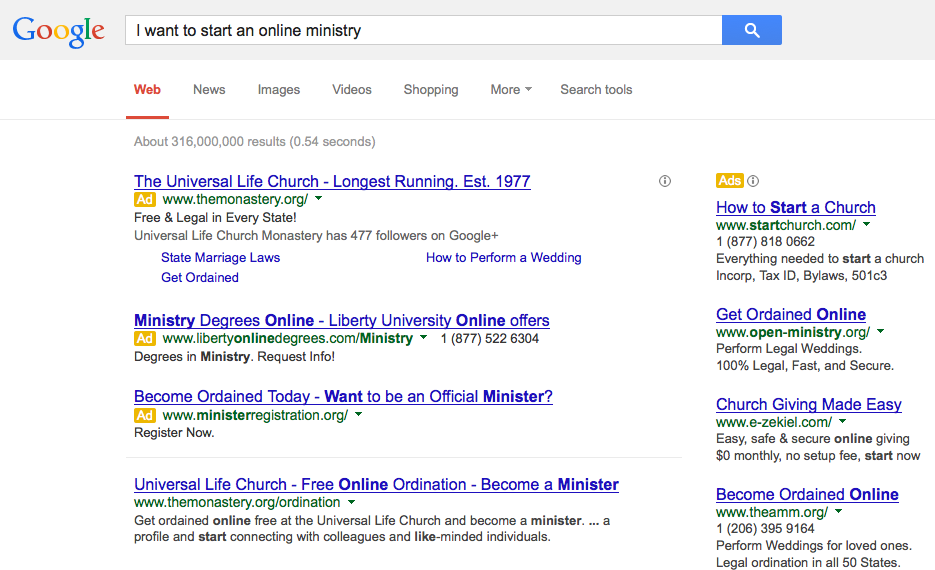 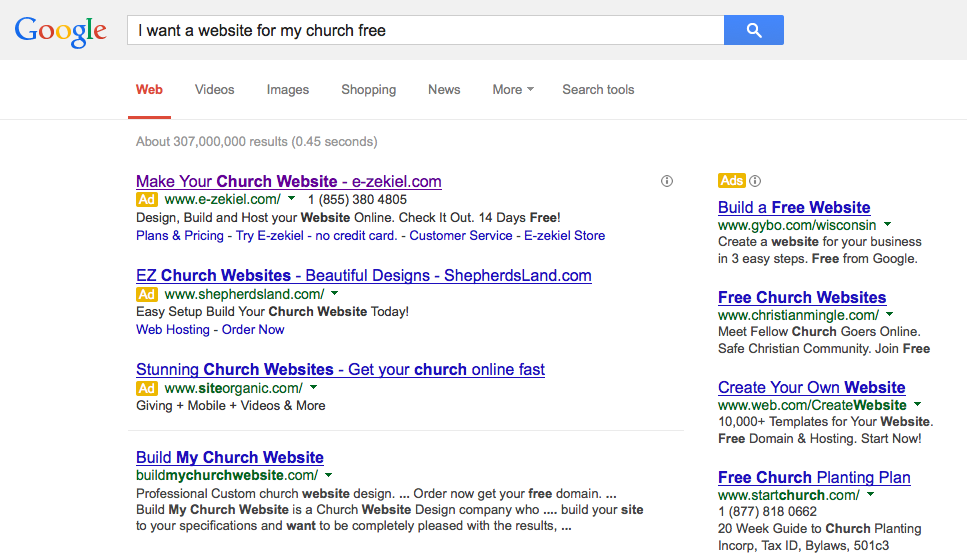 Here are two examples of screenshots taken of searches made to Google's query related to starting online churches and ministries. You can see the advertising options in the columns on the right hand side.